Skip to Main Content
It looks like you're using Internet Explorer 11 or older. This website works best with modern browsers such as the latest versions of Chrome, Firefox, Safari, and Edge. If you continue with this browser, you may see unexpected results.

Kaltura provide a range of video tools and services for staff and students studying with the University of Northampton.

In these Getting Started guides we provide an overview of all the various Kaltura services. The Kaltura Capture desktop recorder which enables you to record your screen, webcam or microphone. The MediaSpace video platform where you can upload, edit and share video and audio content recorded using Kaltura Capture or your mobile device. The Blackboard Mashup tool which enables staff to easily add video recordings into NILE and allow students to submit video or audio for assessment. Kaltura Path which helps you create interactive videos which enable the viewer to guide the action and finally the mobile app, known as KMS Go, which lets you upload video on the go and download content to view offline.

These guides will help you to get started with Kaltura and also signpost you to other training and support in using the additional tools and services provided by Kaltura. If you would prefer to watch or listen to video tutorials on the Kaltura video services then go to the MediaSpace platform and select the Video Tutorials tab.

Getting started with Kaltura Capture 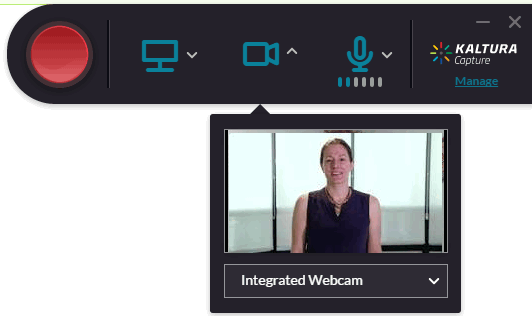 The design of the Capture recorder makes it easy to create videos from your desktop. The recorder has been built from scratch and lays the groundwork for some powerful capture features coming in the future.

Kaltura Capture offers you the ability to easily capture both screen and camera. It also now includes a new automatic slide detection feature which means if you have a PowerPoint presentation in presenter mode when recording your screen, Kaltura Capture automatically detects and captures it, making your video much more searchable.

Kaltura Capture uploads new videos into your My Media folder and makes them available on MediaSpace as well as our Blackboard VLE for teaching and for assessment. It enables academic staff, students, faculty, and other users to create a professional video with multiple feeds, including slides. It can be used for video assignments, assessments, feedback, demonstrations, course content creation, blog posts, administration communications, alumni outreach, and sharing information between institutions.

Updated guidance in light of COVID-19.

Kaltura Capture is a screen and webcam recorder available for Windows and Apple laptop and desktop devices but it is not available for ChromeBooks. Normally, we would advise students with a ChromeBook to loan a laptop from the University to use Kaltura Capture. For the time being, you can either use a free Chrome browser extension like Screencast-o-matic to record your screen or for longer recordings you might want to look at Screencastify which offers a paid account.

Getting started with MediaSpace 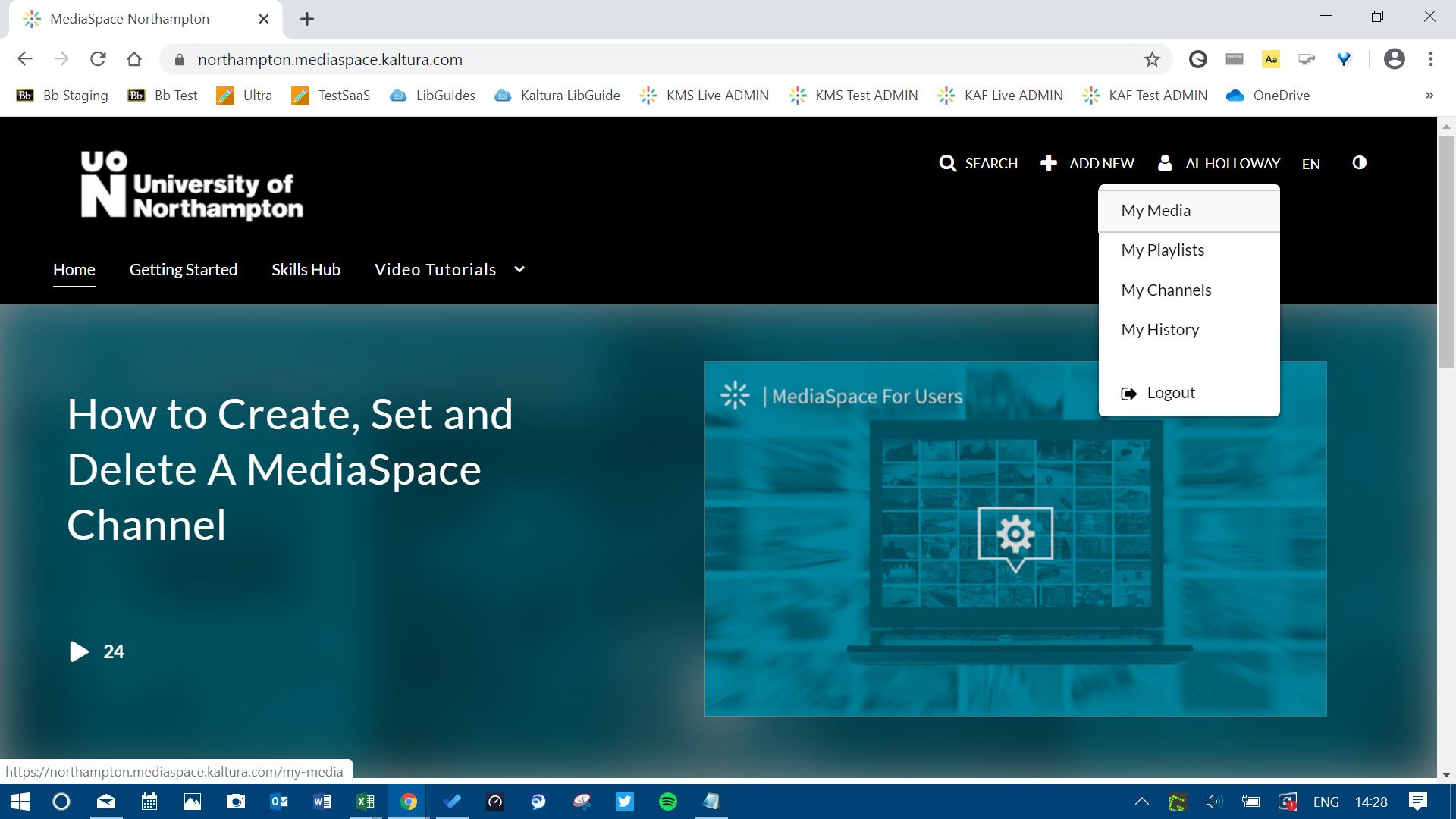 MediaSpace is your own personal video storage and streaming service. Upload your video or audio content to your My Media library and then edit it, share it in NILE or submit it for assessment. Your content is private, secure and available to you as a student or a member of staff for the University of Northampton.

Getting started with the Kaltura Video Editor 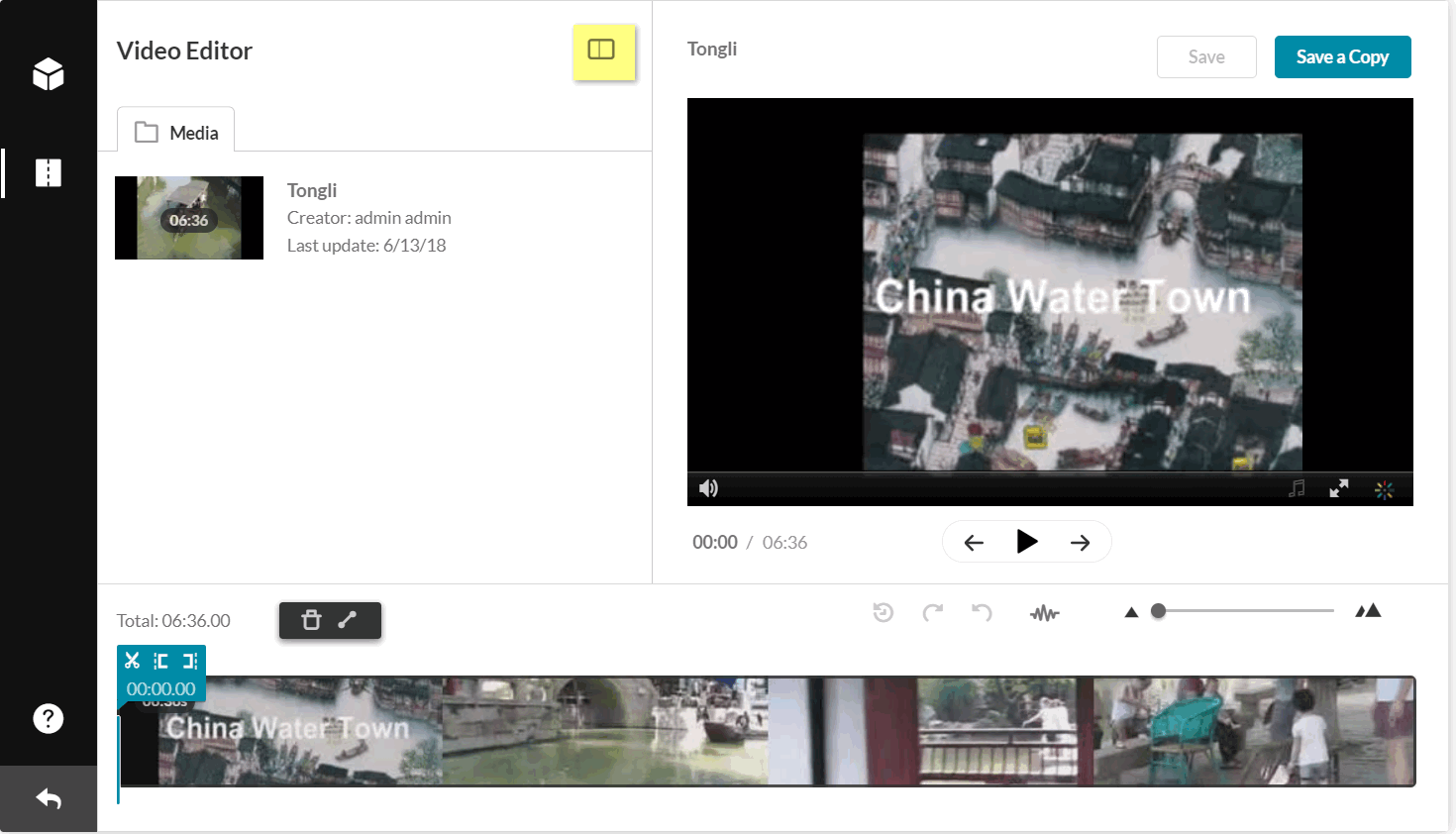 Kaltura provides a simple video editor as part of the MediaSpace platform. It enables you to trim and crop your video, as well as add interactive hotspots and turn your video into an engaging quiz.

The written and video guides below provide a great deal of detail on how the various features work.

Getting started with the Blackboard Mashup tool. 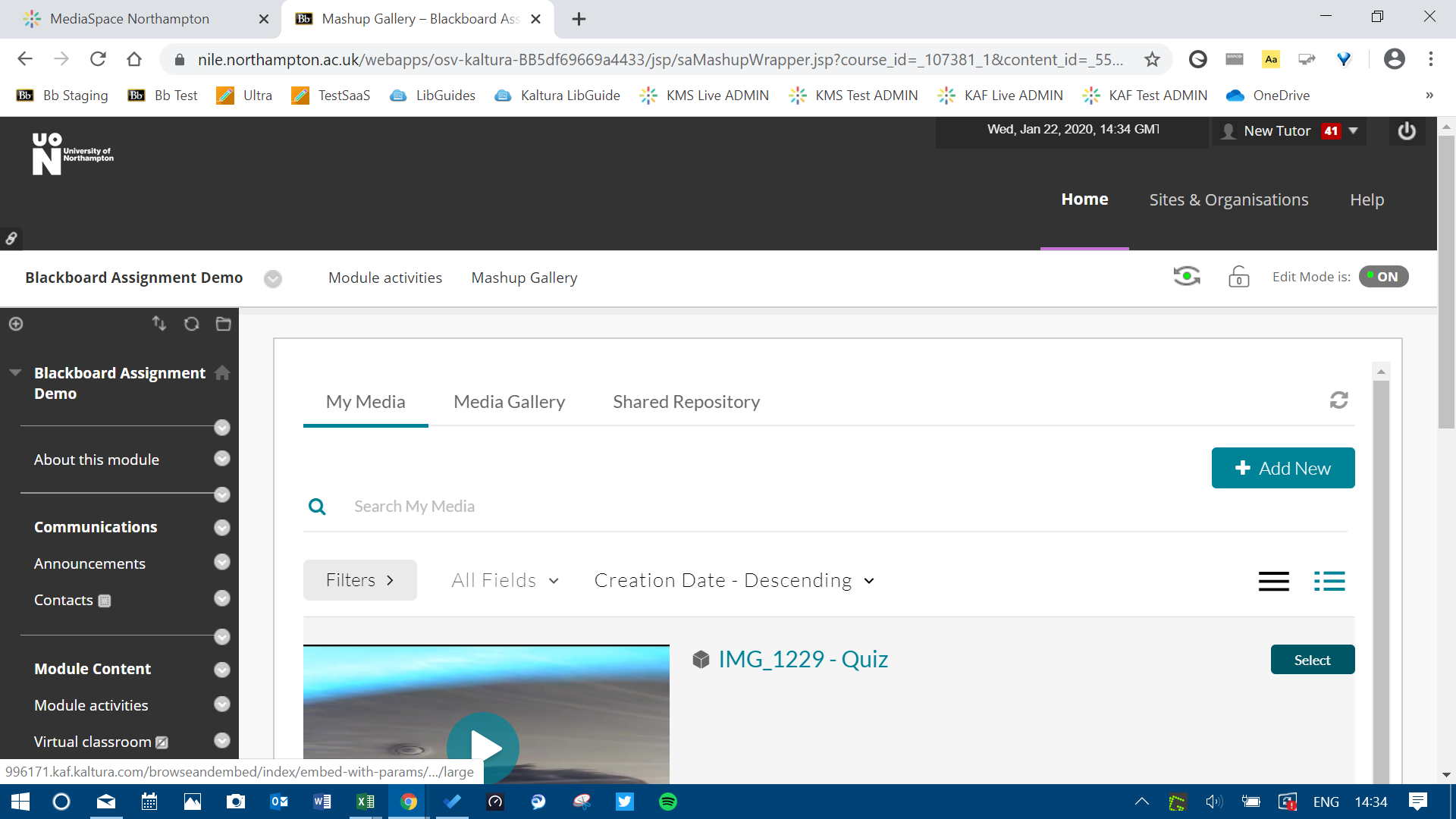 Getting started with Kaltura Path 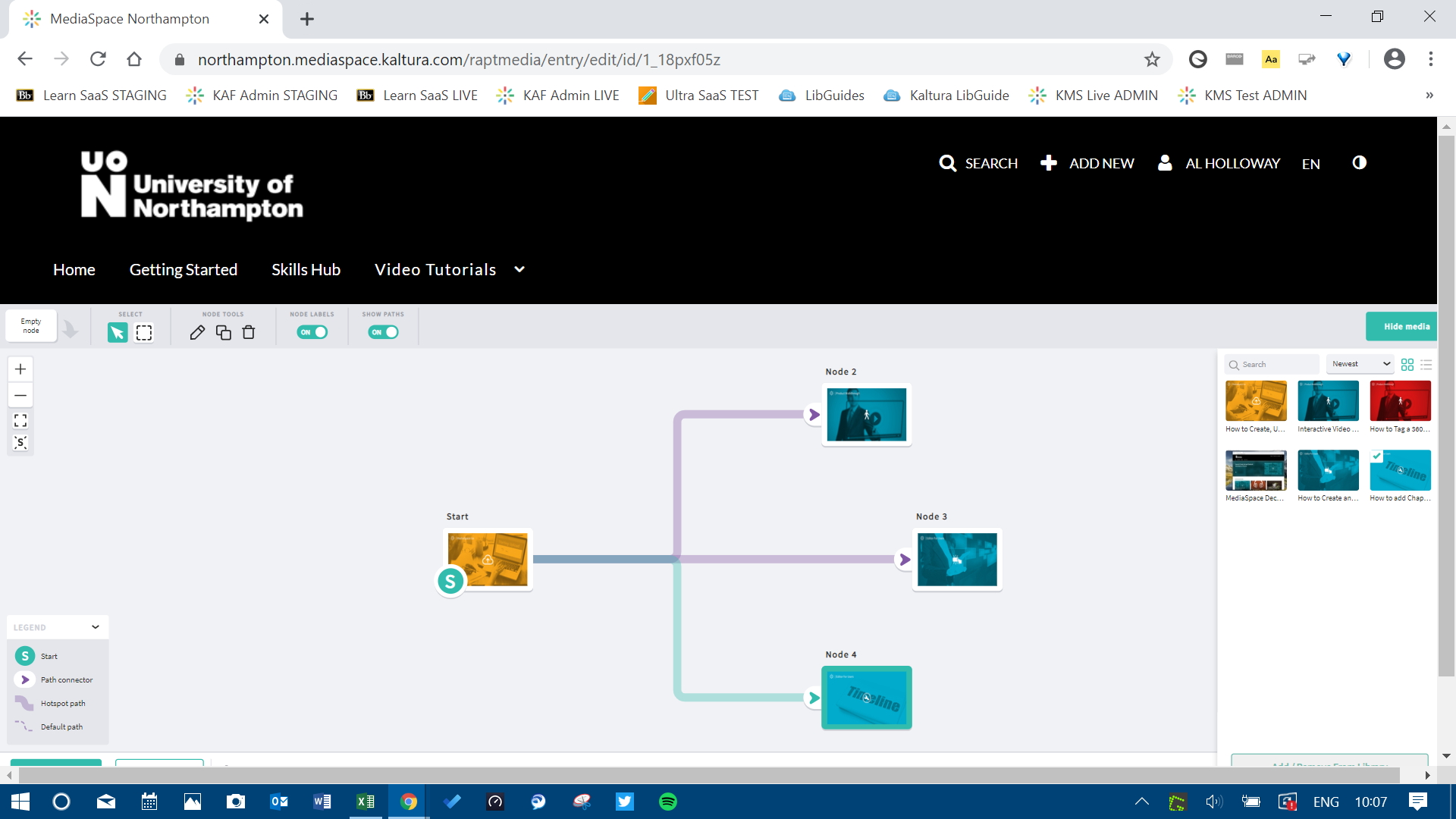 Path is a feature of MediaSpace which enables staff and students to create videos which branch off in different directions based on choices the viewer makes. It's an interactive video where the viewer directs the action and we're keen to see what you can do with it.

You can embed Path videos into Blackboard using the new Mashup tool, or you can copy the embed code from the MediaSpace Share option and paste the code into your MyPad site or other platform.

Getting started with KMS Go 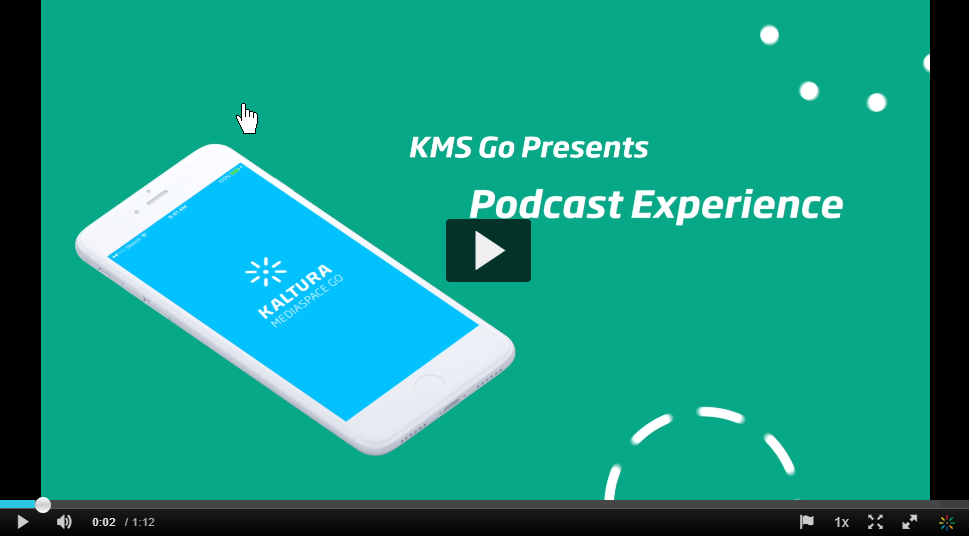 The Kaltura mobile app enables staff and students to upload video on the go and download videos for viewing offline.

How to get more out of Kaltura 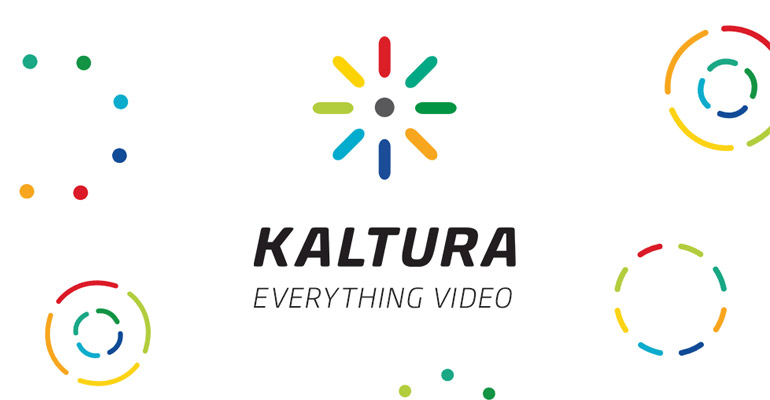 Once you've got used to the basics of these tools, you can begin to do much more with Kaltura. You can add quizzes to your videos, create branching decision videos or share subscription content on the mobile app. You can provide captions and transcripts to make your content more accessible and searchable. Kaltura videos can offer you many ways to enrich your online learning content so please sign up for a group training session, meet with your Learning Technologist or take advantage of our on-demand video tutorials.

When a user uploads a media file to Kaltura, the original media file that is uploaded (known as the source file) is automatically converted by Kaltura into a variety of different formats which are more suited to web streaming. These converted media files (known as transcoded flavours) are the ones that people see when they play back a Kaltura video or audio file. Kaltura converts the source file into multiple transcoded flavours and serves up the most appropriate one upon playback, based on connection speed and device. For example, if you play back a Kaltura video and you have a fast internet connection and are using a laptop or desktop computer, then Kaltura will serve up a high quality transcoded flavour. If you have a slower internet connection, or are using a device with a small screen, then Kaltura will serve up a lower quality transcoded flavour. Essentially, the purpose of having multiple transcoded flavours is so that you can play back the video or audio file without buffering.

Once the one-year period has expired and the source file has been removed, it will no longer be possible to edit Kaltura media. However, it is possible to re-generate a source file from the highest quality transcoded flavour and to edit the media from this, although please note that the re-generated source file will usually be of a lower quality that the original source file.

Storage of media uploaded and owned by staff

With the exception of the source file (see above), Kaltura media owned by staff is kept on Kaltura permanently.

Storage of media uploaded and owned by students

With the exception of the source file (see above), Kaltura media owned by students is kept for five years, after which time it is permanently deleted.

Should you require urgent assistance with NILE, please contact the LearnTech Support Helpdesk via the online contact form